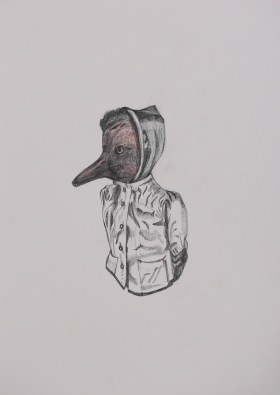 Visual artist Mirjam Somers (1971, NL) makes video works and drawings. After studying sculpture at the Hogeschool voor Kunst en Vormgeving ‘s-Hertogenbosch, she specialized in the medium of video during her postgraduate study at the Higher Institute for Fine Arts Antwerp (BE, 2000).

Motivated by personal and universal themes, such as power and powerlessness, the fragility of the relationship between human, animal and nature, growing up and surviving in a world of paradoxes, and the eternal longing for harmony and serenity, Mirjam Somers creates works that are both soothing and disturbing. The human wandering is depicted in short, atmospheric video pieces. 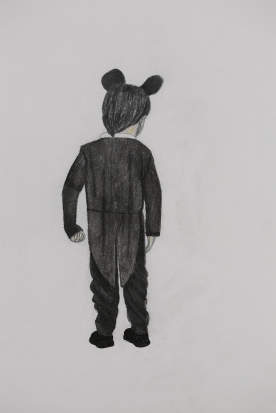 The carefully framed compositions of the videos offer a view into another world. An enchanted world consisting of archaic landscapes in which human and animal live side by side. There is no actual contact between the inhabitants of this world. They sleep, repeat their actions, or are confined to their own world in some other way. They seem condemned to each other, at each other’s mercy. Intense moments of serenity, menace and release unfold in the slow linear time and the fixed frame of the video work. Thus, the videos become slow-moving meditative paintings.

In her drawings, human figures are entwined, interwoven or fused with plant organisms and animal beings. Humans and animals are shown in a power struggle, or joined in their desire for union. The strange creatures are created in the middle of the white surface, isolated from any notional environment.