Lila De Magalhaes is interested in perching right on the unsteady cusp between desire and abject, instinct and composure, animal and human. From video, soap, ink, or a performance with a Saint Bernard dog, her practice varies greatly in form. 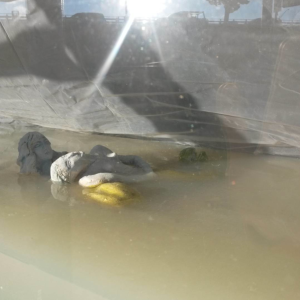 Most recently she has made two mermaids out of clay resembling herself and her flat-mate. They sit together in a transient state, in a plastic bag filled with water. For Tall Tales Lila will showcase this new work Room mates alongside an accompanying video work ‘Rain Control’, which animates these mermaid figures through an everyday yet uncanny scenario – played out by non other than Lila and her flat mate.

Lila will also showcase a recent work, Same Together (The Lady and the Lion) a painting based upon a found artwork by American artist Terry Bowden from an artist project space called Creative G 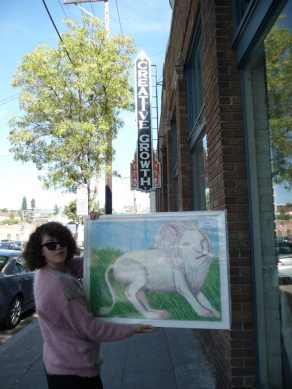 rowth in Oakland, which supports adult artists with developmental, mental and physical disabilities. In his original image, the artist only paints in an albino palette with even fruits only depicted in white and pink.

Lila wanted to insert herself within this artist’s imagery, and pay homage to the work and its maker, creating a new piece Same Together (The Lady and Lion).