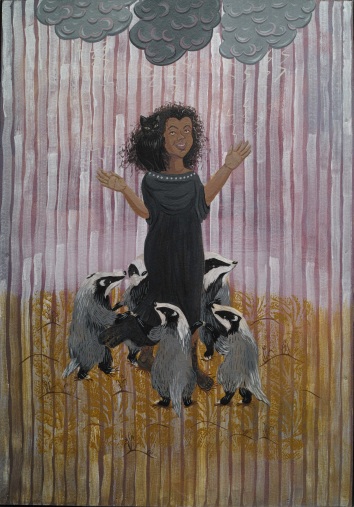 Alison Erika Forde (born 1985, Wigan, Greater Manchester) gained a first class BA (Hons) Fine Art from Manchester Metropolitan University in 2008. She has been practising art in and around Manchester ever since, exhibiting regularly in the UK and overseas. Self published works include picture zines such as The Sleeping Death and the collaborative Putrid Paints.  Alison Erika Forde is represented by The International 3, Manchester.

Alison Erika Forde paints all sorts of anxiety stricken characters, often awaiting impending peril in their playful scenarios. She creates her daydream-inspired paintings on an eclectic mix of objects. By re-using old, unwanted items including mass-produced second-hand prints, bric-a-brac and household wood, Alison transforms these undesirables with her imagined story-book snippets. Drawing on imagery sourced from high art to the subcultural, she produces misleading twists on reality, with a pinch of mischief and dark humour.

Alison is also one third of the artists’ collective Yiiikes! Making vibrant multi-dimensional art that incorporates sculpture, paint and performance, aiming to engage and entertain the viewer with escapism into a parallel universe.

For Tall Tales, Alison Erika Forde’s Speak No Evil (2015) will feature alongside a selection of other wall based as well as sculptural works. Through Speak No Evil, the artist points to what she identifies as a ‘new wave of feminism’ taking place on social media and a perceived backlash against this, as well as attempt to suppress it. Silhouette busts in the style of enlarged Victorian silhouette portraits are cut so that the woodgrain almost appears as blind folds, gags, potentially even historical torture devices used once to silence ‘unruly women’.

Forde’s sculptural works will include a Shame Pole, as opposed to a totem pole, inspired by traditions of the indigenous peoples of the Pacific Northwest coast of North America, and The Tower which explores themes of mortality and the cycle of life. 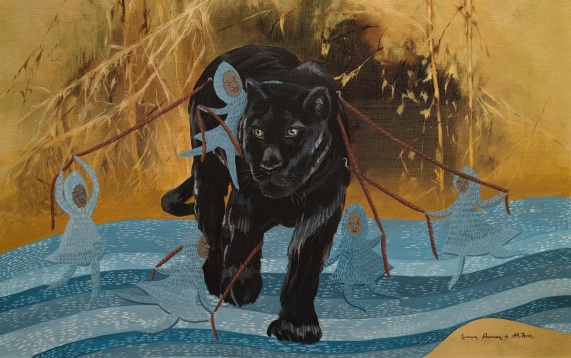